Launching a campaign which targets an audience outside of your organisation's expertise is a huge challenge, and without concrete insights on how and where to best reach and engage that target group, the risk of wasted budget spend plus wasted time is high. Whispr Group’s Campaign/Topic Insights reports remove the guesswork from the equation, providing valuable, data-based direction on where to focus marketing spend and most effectively deploy resources in pursuit of that valuable new target group. For the non-profit Vera Institute of Justice, our report delivered a roadmap for a forthcoming campaign in their quest to end mass incarceration in the US.

"Having the right message and messenger are non-negotiables these days. Whispr Group helped us nail those down on a project whose target audience was outside our prior experience."

Who is Vera Institute of Justice?

The Vera Institute of Justice is an independent, nonprofit national research and policy organisation which works to secure equal justice, end mass incarceration and strengthen families and communities across the US.

One way Vera pursues positive change is through educational campaigns designed to inform the public and provoke action from public officials. The forthcoming County Jail Blues campaign which Whispr Group assisted with is one such example.

What was their problem?

Budget is always a concern for any campaign but as a non-profit Vera have to be particularly mindful of making the right decisions on how to allocate their marketing spend, and be as efficient as possible at maximising return on investment. All while striving to achieve their ambitious goal of changing excessive incarceration in the US.

In their County Jail Blues campaign, Vera tackles the jail boom in rural, small town America, seeking to educate, engage voters in these areas and start informed conversations with public officials about the alternatives to jail expansion. It has partnered with a number of figures in the Country, Blues and Americana music world to help spread the message and spark discussion.

Vera wanted data insights on their most relevant audience profiles and how to target and most effectively reach them. What kind of messaging would motivate them to take action? Which formats would strike a chord and engage? And what platforms are best suited to deliver it all? Whispr Group’s Topic & Campaign Insights Report provides concrete, fact-based direction for those challenges.

When it comes to most effectively reaching Vera’s desired rural and small-town audience for example, our report revealed that conversations about mainstream country music were the most widely spread across the U.S of the sub-genre related conversations we analysed.

Data suggests that traditional country music artists are most likely to engage the small town audiences the campaign initially wants to reach therefore. A concentration of interest in Americana artists among larger population hubs on the other hand suggests that future phases of the campaign targeting city audiences could benefit from leveraging Americana artists in order to inspire and connect with those demographics.

Our insights report then pinpointed the owned social media platforms that should be focused on by artists in order to maximise visibility and best increase their chances of raising awareness about the campaign among those most relevant groups, as well as the optimal content style for doing so.

The report also mapped the main factors that drove the most audience engagement from the social media output of campaign artists. This provided new direction on the best formats for maximising engagement with campaign activities.

“In a very short time, the Whispr Group team became experts about our project. They became a meaningful extension of our team, offering insights and asking questions that helped make our strategy sing” – Jasmine Heiss, Project Director, Vera Institute of Justice. 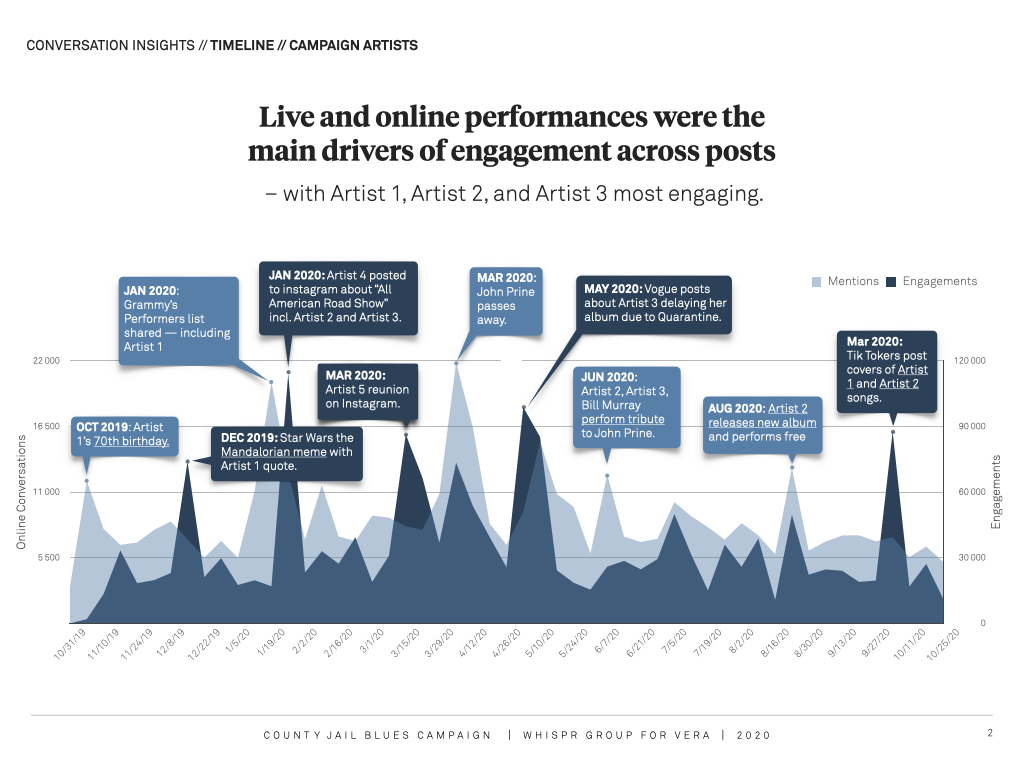 The audience insights unlocked by Whispr Group has informed Vera’s strategising as they start to plan their campaign with regards to approaching partners and backers, their Vice President of Innovation and New Initiatives Kevin Keenan noted:

“We will make concrete changes to our campaign strategy based on the very specific information that the Whispr Group team provided”.