In our webinar on the ways every brand should be using the Share of Voice measurement in 2021, Whispr Group Chief Product Officer Jonas Nilsson highlights the insights from SOV that continue to go untapped by many, and the major pitfalls we see when attempting to measure this deceptively complicated metric.

An on-demand version of the webinar is available via the link below. As a preview, here’s a quick summary of five key learnings every brand should keep in mind in order to maximise how they measure their SOV…

Make sure to compare like-for-like data

While brands tend focus on making sure they are thorough in gathering data about their own brand, the same care is often neglected when it comes to gathering data on competitors.

In general if you’re not comparing apples with apples, the missing competitor data will result in a skewed SOV measure that makes your brand look larger than it actually is.

One example Jonas illustrated in the webinar was measuring the SOV development of electric car manufacturers over time, where disproportionate data input resulted in a misleading output.

In image A (below), we measured the SOV of companies who manufacture electric cars on a brand vs brand level. From this, we could conclude that Tesla is making SOV gains vs its competitors in the sphere, but little more. The level of insights available on top of that is fairly limited (and in some regards even misleading). 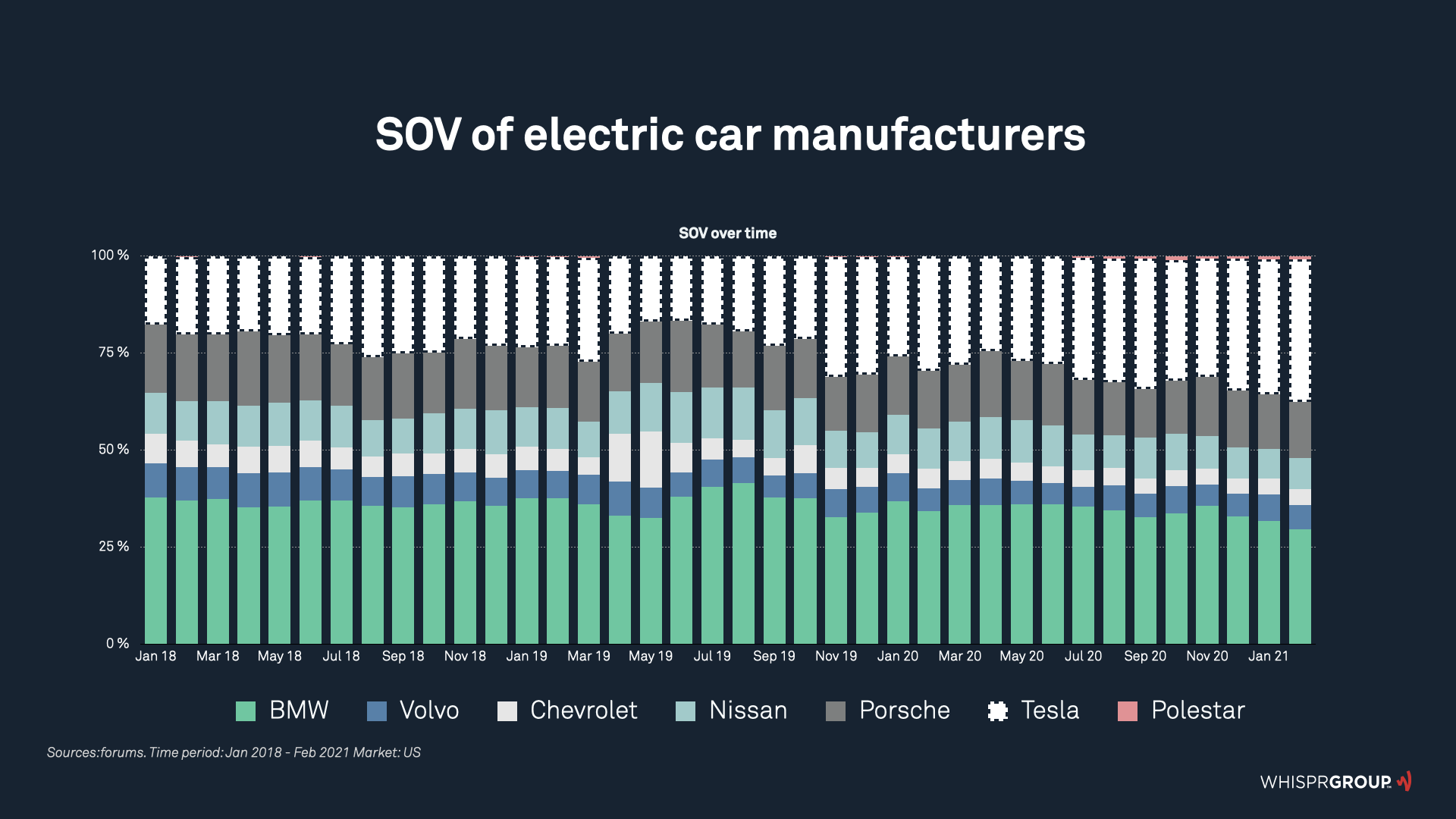 To resolve that issue of not comparing like-for-like, we can instead filter the data by an additional layer to only include conversations about electric car models made by the brands in question, thereby removing irrelevant conversations about traditional combustion engine powered cars from the output. As illustrated in Image B: 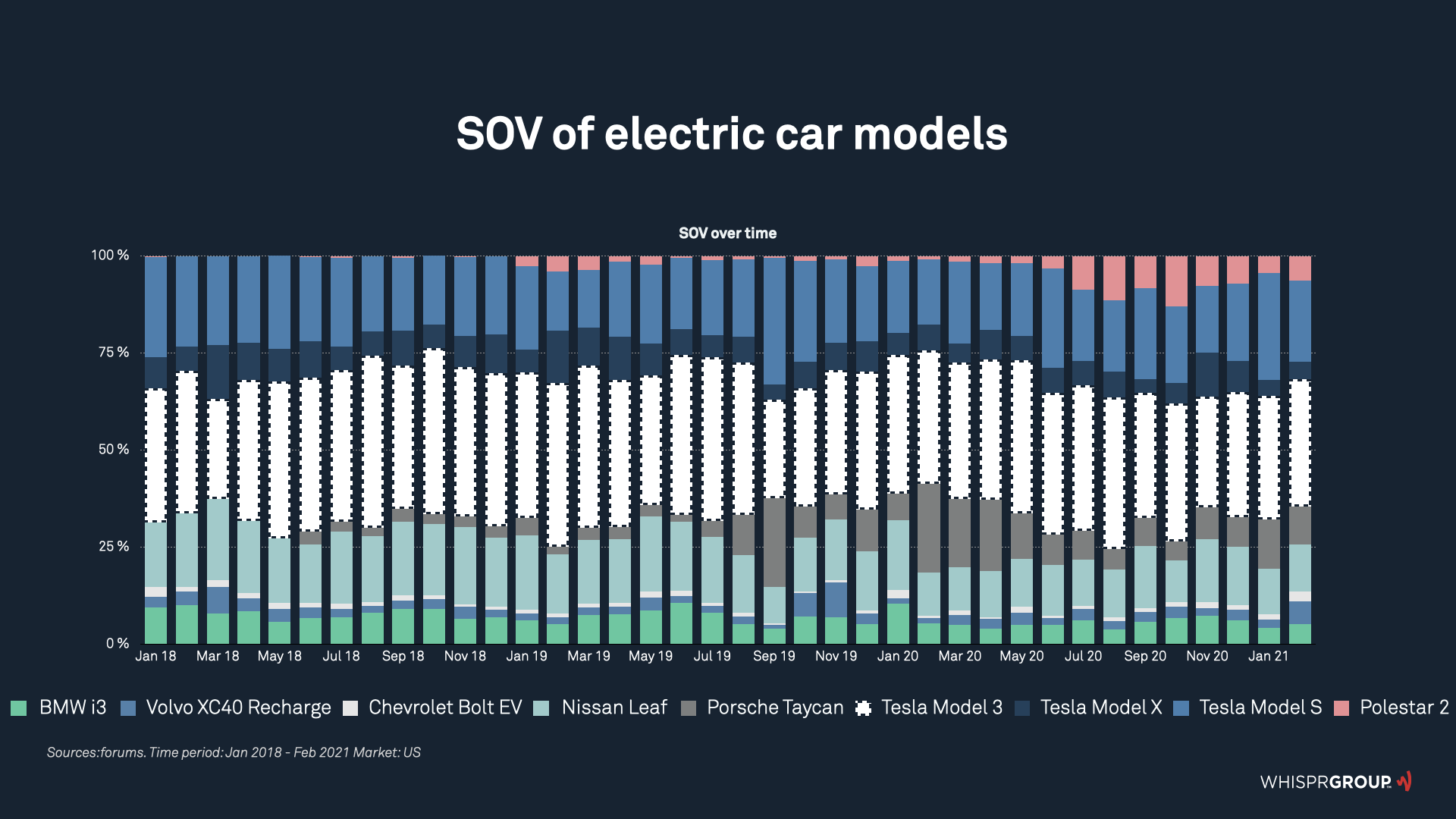 The SOV measure we gain as a result is significantly more complex than the picture Image A painted. Polestar’s consistent growth over time becomes more apparent for example. Porsche meanwhile is shown not to have had a consistently large electric car SOV as Image A had suggested. Rather, it becomes clear that they had a big boom in interest in mid 2019 (the cause was the launch of their Taycan electric model).

The moral of the story is that without taking care to use a stringently like-for-like comparison, you won’t get a true representation of SOV.

Another common pitfall when measuring SOV is failing to account for key differences in ownership structure between the brands measured: namely, differentiating between publicly traded and privately held companies. That’s a more relevant difference than may initially meet the eye.

The public company will generate many conversations about their stocks and financial reports that are likely not relevant to measuring consumer perceptions of their brand. Fail to take that into account, and irrelevant data once again spoils the mix and shapes the resulting output. You’re simply not measuring the consumer interest in the companies in an equal way because you’re also including non consumer interest in the mix.

While the most obvious use of a SOV measure is to track discussions about a brand or product in general, remember it can also be harnessed to track how your brand is perceived in relation to specific key topics.

It’s possible to chart how often you are mentioned in connection with the theme of innovation for example, or map the level of discussions about your sustainability initiatives compared to competitors. Don’t forget to harness the metric as a benchmark for key topics and issues where your brand wants to make an improvement in its consumer perception.

Traditional brand trackers are temporally limited because they start measuring data from the point in time when the first survey question was asked, but the time parameters of online SOV measures can be constantly adjusted according to your needs. That means they are more time flexible and ultimately, more cost effective (you don’t have to pay for fresh surveys to update the time parameters, as would be necessary with a brand tracker).

Remember to harness that flexibility to gain a fuller picture of what’s being seen online in your relevant sphere.  How did the picture look a year ago? What about last quarter? What trends emerge?

A word of warning though: when new competitors enter the sphere, be vigilant about backdating data on them so it’s all accounted for. Don’t get sloppy!

Those with an interest in cryptocurrencies for example may not previously have been concerned about tracking Dogecoin – a crypto initially founded as a joke, and one that for years was seen as little more than the meme it was designed to be.  But when Elon Musk decided to highlight them on his Twitter account and Dogecoin’s value blew up, others in the sphere were left scrambling to catch up and understand the fuss.

Dogecoin’s big SOV boom came at the expense of other incumbents in the cryptocurrency sphere, which Jonas illustrated in the following image: 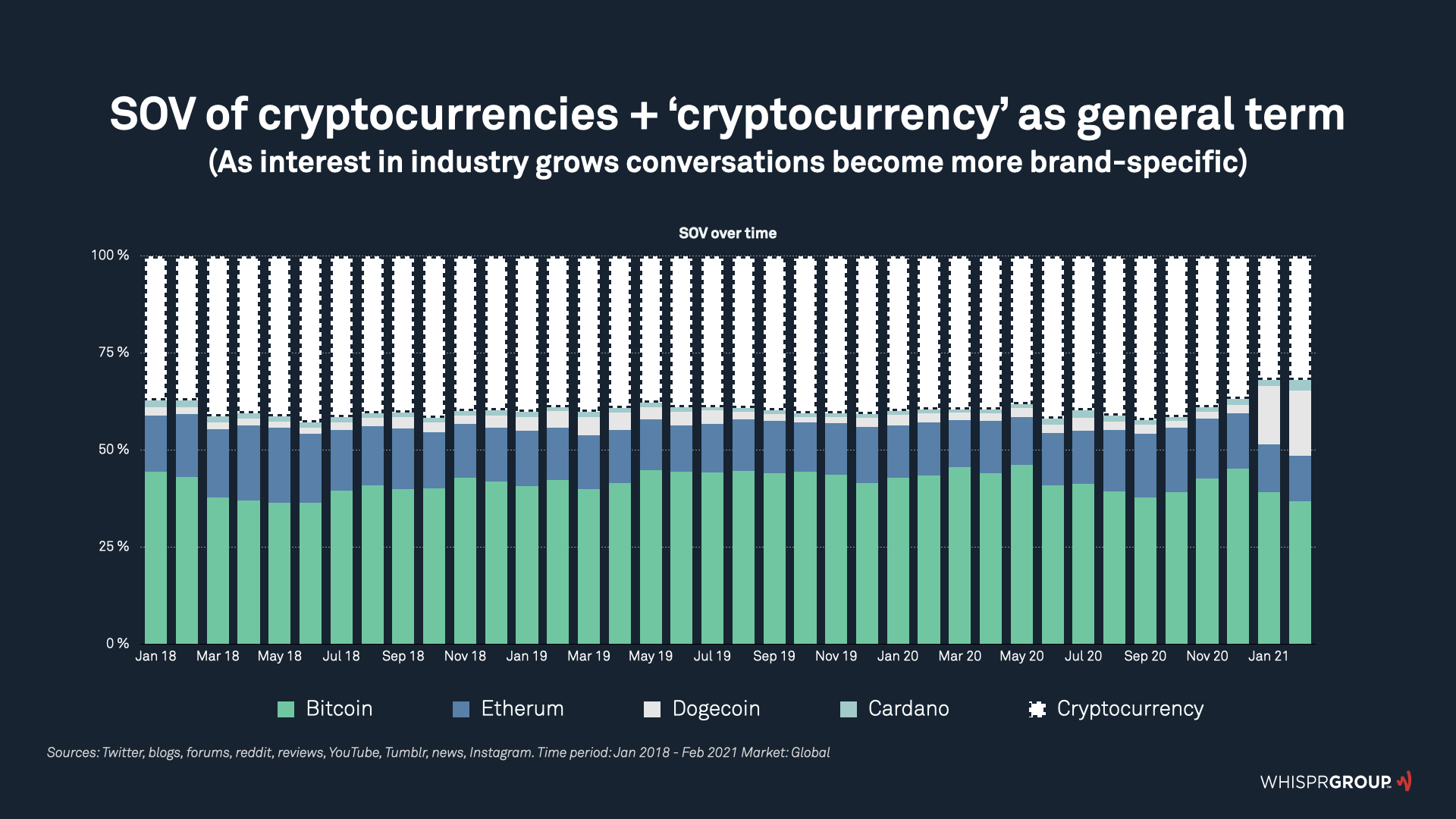 One of the great values of online SOV measurement is its versatility, so make the most of that strength. Adding and removing competitors from the data set for example gives a different angle that can provide fresh and unexpected insights.

As simple a step as removing your largest competitor from the analysis can result in new learnings. How do you measure up to smaller rivals? Are they more efficiently taking advantage of an increase in public interest in your product of choice in a way that could provide you with some direction for improvement?

It’s easy to overlook this kind of lateral thinking in your analysis – one of the reasons having an experienced insights partner is so valuable!

Utilising the expertise of an insights partner ultimately means you save time, gain deeper more actionable knowledge for future brand planning, and avoid missing out on the valuable levels of insight that continue to be overlooked by many brands when analysing the Share of Voice metric.